Flurry of Stories Keeps Rail Project in the News 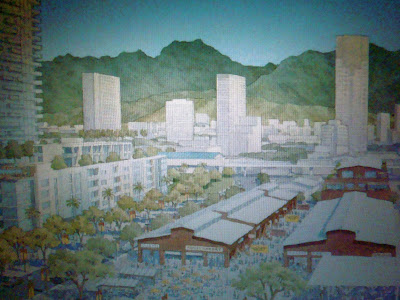 From Kaiaulu `O Kaka`ako Master Planxxxx
Elevated rail line runs mauka of the planned development's buildings.
We’re playing catch-up with the news generated about rail and traffic over the past couple days. An interest in renewable energy technology took us to Waikiki and the Asia-Pacific Clean Energy Summit & Expo yesterday to see how ocean power one day will be used to power Honolulu’s train. (So will wind, solar and other forms of clean energy.)
We’ll quickly dispense with the Wednesday column that continued to beat on an alleged GET collection shortfall on the project. The “shortfall comparisons” focus on current GET collections (unsurprisingly below the project’s 16-year trend line) and ignore the anticipated above-the-trend-line collections after the recovery. The project’s financial plan (also unsurprisingly) looks at the whole picture, a normal practice in responsible planning.

But that was yesterday’s news. Today, the Advertiser reports on a study by TRIP, a national transportation research group, that includes this observation:

“Traffic congestion in Hawai`i’s largest urban areas is likely to worsen significantly unless the state is able to improve its transportation system.”
Improving urban transportation is what the City’s rail project will do, of course. Commuters today have no alternative to sitting in congestion during peak travel hours – a condition that can mean near or complete gridlock as shown in the photograph in the margin, above right.

The Advertiser’s lead story covers the Hawaii Community Development Authority’s approval of a large residential and commercial redevelopment of the Kakaako district.

The elevated rail line will run along Halekauwila Street on the mauka border of the redevelopment project and above the surface street congestion anticipated by the TRIP report in years ahead.

The Kakaako station “will help create dense pockets of potential transit commuters,” the report says.
Posted by Doug Carlson at 9/03/2009 07:58:00 AM