How Is it that Honolulu Isn’t Ranked in the Inrix Annual Traffic Study this Year? Our Eyes Tell Us Oahu’s Traffic Is Increasing, so What Gives? 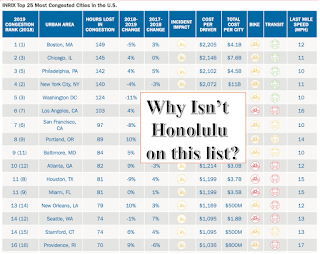 The new international study is out today, and unlike every other year we can recall, Honolulu’s not in it. At least, we couldn’t find any mention of driving hours lost to congestion in Honolulu due to traffic in 2019.

That seems curious. The 2018 study ranked Honolulu #18 on the national list, with the average 92 hours lost to congestion. The ’18 report said congestion had dropped 4 percent from the year before, so Honolulu appeared “to be on the right track.”

But does anyone believe Honolulu’s traffic improved so much in 2019 that the city dropped completely off the list of America’s 50 most heavily congested cities?

TomTom, a company that uses a different methodology, ranked Honolulu #9 just last year in the mix with mainland cities using its Traffic Index. As recently as 2012, Honolulu edged out Los Angeles for the infamous #1 rank among mainland cities for hours lost to congestion. In 2013, it was the second worst; 2015 had the city as 10th worst.

So for the city to slip completely off the list seems not likely. Maybe one of our media friends can figure out why Inrex's new ranking excludes Honolulu.**

Or is it simply that congestion elsewhere is increasing so fast that Honolulu's been surpassed.

It sure doesn't feel like traffic's getting better in Honolulu. Maybe this is just another example of Hawaii being "left out" of the United States -- something that used to happen so often in mainland publications that it would drive Pacific Business News Editor George Mason to distraction!

** A local reporter saw my Twitter post (@DougNorCal) and responded: "I wondered about that too -- reached out to @INRIX this morning; haven't heard back yet..." Will be watching to see if he writes about a response from Inrix.