Headed to Washington for Obama’s Big Day? City’s Metro System Is Ideal for Moving Around 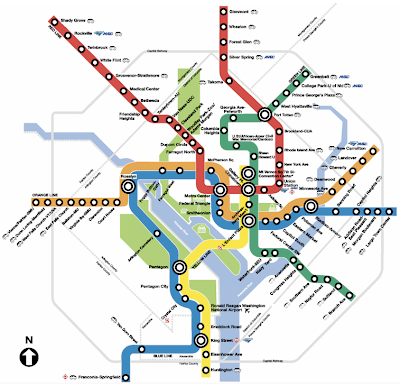 "You can't get there from here" -- not something you'll hear in Washington, D.C.
Dulles and Reagan Airports, the Pentagon, Georgetown, Foggy Bottom, Dupont Circle, White House, Capitol Hill and THE INAUGURATION! The excitement is approaching fever pitch as hundreds (thousands?) of island residents get ready to do D.C.

And not only will this be a first-time experience for many of you, so will the opportunity to use a modern rail transit system. The Washington Metro is more than 30 years old, and like the human condition, has grown around the edges over the years.

The Metro system’s lines run to all points of the compass from the heart of the District. Metro is the way to get around Washington and the suburbs. One line runs all the way from Dulles International Airport to L’Enfant Plaza. Another connects near-town Reagan Airport with the heart of the city and just about everywhere else.

You can ride the Blue Line from Springfield, VA in the south, past Reagan Airport to the Pentagon, the office hub of Rosslyn, VA, into the District and Georgetown, the Smithsonian, beneath the grand boulevards that parallel the Mall, to Capitol Hill, the Library of Congress and on to the Maryland suburbs in the east. The Metro website has all the information you’ll need to get around, including a trip planner.

As you ride the Metro rail system, imagine that a similarly convenient system will serve Honolulu within the decade. Just like Metro's rail passengers in Washington, Honolulu riders will avoid traffic entirely – arriving on time, every time. Want to read a book or newspaper? Go right ahead. Want to doze off and catch a few winks. You can do that, too.

Modern, efficient, comfortable, cost-effective….there’s no limit to the positive descriptions of rail transit systems around the nation and world, and the same will be said of Honolulu’s rail system. Ride Washington's Metro yourself, then tell your friends here at home what it was like.

As a public service, we’re linking you to the Obamathon Man website that dispenses just about all the info visitors will need to get the most out of their Obama Inauguration trip to the nation’s capital.