Today’s post continues the dissection of last Thursday’s “Insights on PBS Hawaii” television panel discussion on Honolulu’s rail project. We previously looked at the American Institute of Architects (AIA) representative’s statements about the Environmental Impact Statement process and how he was contradicted by three others on the panel. Yesterday's post concentrated on the implausibility of the AIA claim that its proposed at-grade system could carry as many passengers and do so nearly as quickly as the City’s elevated plan.

Today’s issue is safety, which we’ve previously noted has been ignored by the AIA. We’ll pick up with host Dan Boylan reading a question sent in by a viewer:

Boylan: “Commaaina wants to know via Twitter, Peter: 'The AIA ignores the poor safety of at-grade systems. Phoenix had 52 accidents in its first year. It mustn’t be built here.'” 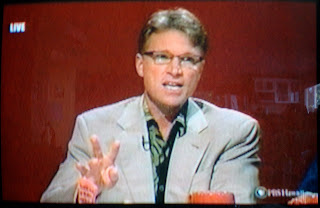 Peter Vincent: “And the City has ignored the accidents and the safety record of, say, the model Vancouver SkyTrain system, and Mr. Okino has said to me personally that there’ve been no accidents there….”
Council Member Gary Okino: “I didn’t say there have been no accidents, but it’s not….”
Vincent: “…when Sean Hao’s Advertiser article upon research indicated there have been 10 accidental deaths in Vancouver, OK, so there are unfortunately accidents with any system. The good news, and being for a rail system here, rail has a very low incident rate compared to other modes of transportation. So rail, being elevated (or) at-grade is a much safer way to travel than most other ways.”
Upon Closer Examination
The viewer’s question specifically addressed at-grade’s relatively poor safety record by noting the Phoenix system’s accident-a-week rate in its first year of operation. How does the AIA’s Peter Vincent respond?

He completely avoids the obvious thrust of the at-grade safety issue and then obfuscates it by protesting that “there have been 10 accidental deaths in Vancouver….” His source is Honolulu Advertiser reporter Sean Hao, whose inaccurate reporting on rail and selective use of quotes has been noted in this blog.

We’ve made our own inquiries about Vancouver’s safety record. Doug Kelsey, president and chief executive officer of British Columbia Rapid Transit Company, Ltd., which operates and maintains the Vancouver SkyTrain, says there have been “zero accidents caused by the technology” on the system.

Kelsey says SkyTrain has learned from the few regrettable incidents on its system and installed an intrusion system that triggers an alarm when it detects someone falling off the platform. (SkyTrain was recognized late last year as “Best Organization” at the Fifth Annual Lieutenant Governor’s Awards for Public Safety – British Columbia’s highest safety honor.”)

What also comes through is that Vancouver's accidents have been "personal" in nature and not collisions, which is the major issue with at-grade transit. As City Transportation Services Director Wayne Yoshioka said at a January press conference:

“Let’s go back logically and look at this. You’re elevated. You’re totally separated from the roadway. You’re in a protected environment and completely separated out… What cars are flying at that level above the ground? And what people are flying through the air at that level above the ground? As opposed to an at-grade transist that’s crossing active streets with active vehicles turning in front of the train, with pedestrians crossing in front of the train?”
Perhaps the AIA’s representative thinks he’s doing his organization’s bidding well by sidestepping the obvious fact that no cars, no trucks and no buses have crashed with SkyTrain, but it’s even more obvious that he’s selling something that’s not true.

At-grade transit systems are much more prone to accidents than grade-separated systems. By rolling at-grade and elevated into the same broad “rail” category, Vincent blatantly misled the viewing public during last week’s program.

And that unfortunately characterizes the AIA’s campaign for at-grade rail here. As noted in yesterday’s post, the AIA pooh-poohed the time difference between an elevated system’s speed and that of a relatively slow at-grade experience.

But there is absolutely no way a train operating on the ground and traveling on this map’s red route can move through the heart of Honolulu at anything close to the speed of an elevated train using the blue route on the map. There’s just isn’t.

The AIA would do us a public service by ending its semantic tricks about the speed, safety, reliability and capacity of its proposed at-grade train. One small group of architects apparently holds aesthetics above all other considerations. (See our January 29 post for the AIA’s internal poll’s remarkable results showing that elevated actually received more support from the AIA’s membership than at-grade!)

The AIA is obviously deflecting the argument -- we've posted a compendium of information on elevated vs. at-grade system safety at http://www.prtstrategies.com/lightrailargs.html which proves their position is plain uninformed and very poorly reasoned.

But, the answer for transit on Oahu isn't rail at all, it's Personal Rapid Transit. See http://www.prtstrategies.com/honolulu. PRT is elevated as this system should be, but at a much smaller footprint and FAR LESS expense than light rail. Neither is it limited to a simple linear alignment. Green and 24/7/365, PRT's the answer at 1/9th the price!

Good to see you again, PRT Strategies, and thanks for supporting my conclusion about AIA's own strategies. I hope you're on the ground floor one of these times when a municipality proposes building new transit and can jump in while the jumping is still timely.

Well Doug, we believe this ludicrously expensive and poorly designed light rail project will go absolutely no where and be belly up this year or next. It will never be funded and fail during the EIR/EIS process. As you know, there hasn't been a large-scale elevated rail system built in the United States in 30 years, and the idea of constructing a huge, visually obstructive concrete and steel infrastructure in a place known for its inherent beauty and one so dependent on tourism is absolutely ridiculous.

At the point this idea deservedly dies, we'll have already done our introductory work and be ready to respond to a fair and equitable RFP which will consider ALL viable forms of transit for Oahu.

Well, PRT, I wish you luck with your personal people mover strategies. It may work somewhere, but not now and not here, where the need is to move a hundred thousand people or more each day quickly and reliably just like they do in the big cities of the world.

You're certainly entitled to believe anything you want about design and funding of Honolulu's system, but that, too, is your personal opinion.

Let me know how your PRT Strategies are working out for you, and if they seem viable, I'll be happy to contribute to your publicity.