We knew something better would come along to write about on Groundhog Day than those silly online opinion surveys – and something did:

The Obama Administration has proposed to award Honolulu $55 million during fiscal year 2011 as a head start on a Full Funding Grant Agreement that eventually will reach $1.55 billion.

The Honolulu rail project is one of 27 major transit projects across the nation that would receive funding according to the President’s 2011 budget.

“These projects, planned and developed are crucial investments that will boost economic vitality in cities and towns across the country," said U.S. Transportation Secretary Ray LaHood (at right). "From New York City to Honolulu and areas in between, these projects will create jobs, diversify local transit options for consumers, and stimulate economic activity at a critical juncture in our continuing recovery." 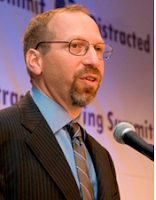 Federal Transit Administrator Peter Rogoff (at left) said: “Projects like these are at the very heart of President Obama's agenda to clean up our environment, reduce our dependence on oil from overseas, and put people back to work. They will give our citizens a way out of punishing traffic jams and improve their quality of life."
Speaking to reporters after the announcement, Honolulu Mayor Mufi Hannemann said federal support for Honolulu rail is clear and urged Governor Linda Lingle to set aside whatever concerns she has about the project’s financial plan: