Ten days in office was all it took for Governor Neil Abercrombie to officially accept Honolulu rail’s Final Environmental Impact Statement and declare that the State government is satisfied with the project’s plans to mitigate potential impacts.

Other major steps are required before the project can break ground, including the issuance of a Record of Decision by the Federal Transit Administration. Mayor Peter Carlisle said he anticipates a construction start early next year.

“The role of the state in this step of approving the environmental impact statement for Honolulu’s rail transit system is to ensure that all economic, social and environmental risks have been properly addressed under law. After a thorough review by and consulting with the state Office of Environmental Quality Control, I conclude the City and County of Honolulu has met these obligations. I continue to support a transit system in Oahu. Projects with it will be central to Oahu’s future development.”
Abercrombie pledged “continuing open communication at the state level with the city authorities and communities across Oahu and all the islands.” 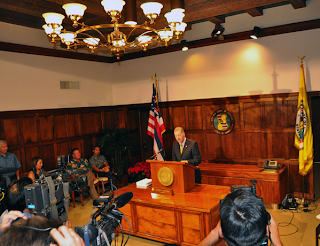 Mayor Carlisle called a press conference (at right) within an hour of receiving Abercrombie’s decision. “Moving forward with rail transit creates much-needed jobs for our communities, provides long-term traffic relief and offers a dependable transportation alternative that starts us on the right path toward our preferred future,” Carlisle said.
"I want to thank Gov. Abercrombie for accepting the project's EIS, the former mayor, the City Council, Hawaii's Congressional delegation, the State Legislature, labor and business organizations, the Federal Transit Administration and other federal partners who have helped us and pledged funding."
About that Funding

Nobody is predicting clear sailing for rail, not even the City. Rail opponents already are pledging to file lawsuits against the project, continuing their decades-long attempt to block fixed guideway transit on Oahu. And then there’s the study of rail’s financial plan ordered up by former Governor Linda Lingle conducted by Infrastructure Management Group.

IMG’s study continues to generate some media interest, but virtually all of it is at two relatively obscure online sites – Civil Beat, the subscription news service, and Hawaii Reporter, which is a frequent outlet for anti-railers Panos Prevedouros and Cliff Slater.

The City today released an eight-page review of IMG’s study, which suggested a $1.7 billion shortfall in the project’s financial plan. Civil Beat found a $277 million mistake in IMG’s calculations, and the City’s assessment digs in deeper. The document’s summary:

“While the IMG report purports to focus on the financial implications of the City’s rail transit project, much of the report discusses bus issues that are independent of the rail project. Concerning both bus and rail, the report’s conclusion of a resulting $1.7 billion shortfall is not adequately substantiated. A review of IMG’s methods show that important and more relevant data was not recognized or considered and the report’s authors used incorrect figures and assumptions that allowed them to reach unsupported conclusions. The report also reflects a lack of understanding of transit financials and fails to recognize key economic indicators used by the State of Hawaii. This further reinforces the City’s position that the rail transit Financial Plan is sound. In addition, the FTA has already reviewed the City’s Financial Plan, and found the project to be financially sound and allowed it to move forward. The FTA also continually reviews the project’s Financial Plan and will do so again as the project enters its next phase of final design."
So does the Governor’s acceptance of the FEIS “green light” rail, as the Star-Advertiser suggested in its headline over its first online story on today's developments? Not hardly in light of the steps ahead, but there’s no denying the importance of this one.

We’re expecting quotes in Friday’s morning paper by the aforementioned rail opponents. They’ve been at it for two decades, and we know their criticisms by heart.