In Reporting the ‘Other Side’ of Rail Story, Honolulu Media Keep Publicizing Views of Critic Known for His Decades-Long Campaign to Mislead the Public and Obfuscate Facts

You can’t blame the news media for searching out rail critic Cliff Slater when they need a rail opponent’s views for an emerging story. He’s been fighting rail since the Fasi Administration and is always ready with a quote, as he was yesterday for KITV.

But you do have to wonder if reporters understand the depth of his misrepresentation of rail facts over the years. We’ve repeatedly documented his record here at Yes2Rail (see the Mr. Cliff Slater section of our “Aggregation Site”) and will keep at it as long as Slater continues to be the media’s go-to anti-rail talking head.

Reporters show no obvious awareness of Slater’s track record as Obfuscator in Chief. I’ve never seen a reporter put Slater on the defensive about his main talking point.

Slater seemed to be prideful of that talking point when he spoke to Hawaii News Now in 2012: “We’ve been promoting the fact that the city says in the final EIS that traffic congestion with rail in the future will be worse (than it is today).” 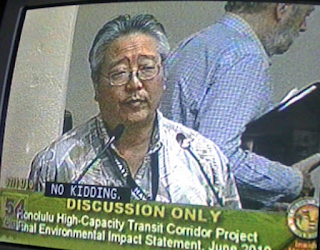 Two years earlier, Slater used that point before the City Council, only to have Wayne Yoshioka, the city’s Director of Transportation Services, sarcastically put him in his place: “No Kidding, in the future, traffic congestion will be greater than it is today. I don’t think that’s any earth-shattering news….”

Yoshioka’s point was that congestion will continue to grow along with the population and that it will be worse without rail than with it. Even Slater had to admit that point when pressed at the City Council hearing.

But have the media ever taken note of Slater’s deliberate obfuscation? Even the mission statement at his website hides the fact that traffic congestion is here to stay for reasons we’ve discussed here at Yes2Rail as recently as this month.

So reporters (if any of you accidently stumble across Yes2Rail), please stop giving Cliff Slater a free pass. Ask him straight out: “Will building rail slow traffic congestion's growth along Oahu’s commuting corridor?”