We’ve devoted much of our space this week to examining the rhetoric of Cliff Slater, the rail project’s chief opponent, and we’re doing so again today. It would appear that after 20 years of obfuscation, Mr. Slater finally has admitted the truth: Honolulu rail transit will reduce traffic congestion on Oahu.

As reported by online news service Civil Beat early this week, Mr. Slater tells his audiences that “traffic congestion with rail in the future will be worse than it is today.” “That kinda sums up the whole argument,” he said, and we’ve taken pains both on Monday and Tuesday to point out the shallowness of that rhetoric.

Unfortunately for Mr. Slater, it backfired at Wednesday’s City Council hearing on rail’s Final Environmental Impact Statement. As we reported yesterday, Mr. Slater used his allotted time to comment on Transportation Services Director Wayne Yoshioka’s response to him as contained in the FEIS. A Council member asked Mr. Slater to expand on that point:

Cliff Slater: “I was complaining that the City was never directly telling people that traffic congestion in the future with rail will be worse than it is today. We don’t disagree at all that rail will have an effect on reducing traffic congestion from what it might be if we did nothing at all, and he was responding to that. We’ve been trying to get him to say that for the last five years, so we were somewhat overjoyed when we actually got this letter….”
'No Kidding' 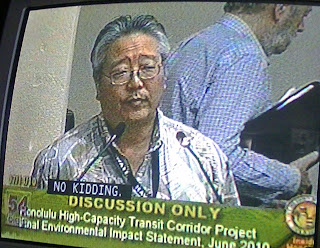 Wayne Yoshioka’s response: “Just to add to that. No kidding, in the future, traffic congestion will be greater than it is today. I don’t think that’s any earth-shattering news. I think what the difference is, is that without the rail in the future, traffic congestion will be much worse than with the rail, and I think that’s the whole point of the discussion would be. It’s not appropriate to compare what the future is with rail with what it is now, but it is to compare what the future would be with or without rail. That’s the comparison that should be asked, and that’s not what Cliff Slater was just talking about.”
Mr. Slater’s major argument – “the whole argument” to use his words – came down to a “no kidding” moment. Mr. Slater has used his dubious commentary for the past two decades to mislead the public on this issue of future traffic congestion.

As we say here in the islands, it’s shibai to compare congestion 20 years from now with rail to what it is today – especially to consciously suggest rail will provide no relief from congestion. Mr. Slater finally had to admit the truth -- "no kidding" about it.
Posted by Doug Carlson at 7/16/2010 07:45:00 AM