Next Generation Tells Council ‘We Will Ride It’

The generational contrast wasn’t exactly black-and-white; some in the older generation (of which this writer is a member) supported rail, but most who testified did not. The young testifiers were eloquent in their support of rail transit.

Today’s Yes2Rail post carries the verbatim testimony (transcribed from the ‘Olelo cablecast) of a representative of the “We Will Ride” group and a decades-long rail opponent. 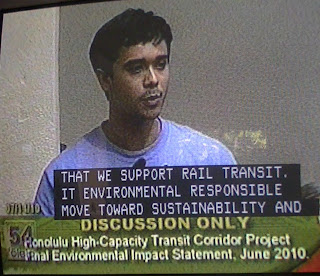 Good afternoon, Mr. Chair, Council members. My name is Chris Ballesteros, and I’m here as a representative of an organization called We Will Ride. We represent over 400 young people, mostly high school- and college-age students that are dedicated to the promise that rail transit has for the future of Honolulu.

Now, there are a number of reasons why we support rail transit – obviously because it’s environmentally responsible, that it moves toward sustainability and that it promotes economic growth.
But more specifically to our generation, we believe that moving rail transit is critical because it will provide the construction jobs, technology jobs, architecture, all sorts of high-tech employment for our generation. It provides an incentive for young people who have perhaps gone to the mainland for college to come back to the islands later on.
So essentially, I’m here and we’re here to tell you all and to tell the people and the Council that if you build a rail system, we will ride it.
Cliff Slater 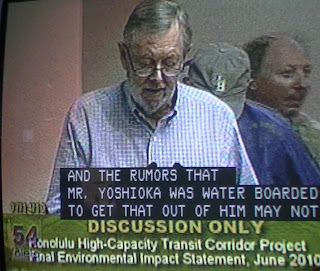 Chairman Apo and members of the Council, thank you for giving us one minute to testify on the 11,000 pages of the FEIS, appendices and 18 technical reports. I would like to draw your attention to page 24 of the City’s letter to me in the comments on our DEIS comments. Mr. Yoshioka says, “You are correct in pointing out that traffic congestion will be worse in the future with rail than it is today without rail.” And the rumors that Mr. Yoshioka was water-boarded to get that out of him may not be true, but nevertheless, it’s a fact that most people in the ewa plain do not understand that traffic congestion with rail will be worse than it is today.

As far as the FEIS is ready to be out as a Final EIS, the EPA last February told the City that they had to have the Section 106 consultation which concerns the history and archeological resources, that that has to be completed prior to completion of the Final Environmental Impact Statement, and I think as most of you know, that hasn’t been done yet.
Comment

If Chris Ballesteros represents Oahu’s future, the community would seem to be in good hands. He was articulate, spoke without notes and maintained eye contact with the Council as he made his case. Cliff Slater’s penchant for sarcasm was evident in his first few seconds, and the bulk of his prepared testimony was a repeat of the same worn-down theme we’ve examined this week in Monday’s and Tuesday’s posts here.

If the Council members were paying attention, they saw and heard the future, and it was decidedly with rail.
Posted by Doug Carlson at 7/15/2010 09:42:00 AM