We’ll Later Ask, ‘How Did We Ever Live Without It?’ So Says Rail Expert with World of Experience

This must be "Civil Beat Week." We’ve linked to the online subscription news service Monday and yesterday and do so again today. Today’s top story is headlined “Honolulu Has Nation’s ‘Premier’ Rail Project,” a quote by Rep. Jim Oberstar of Minnesota, chair of the U.S. House Committee on Transportation and Infrastructure.

Oberstar was speaking via video conference yesterday from Washington as a participant on the Summit on the State of Physical Infrastructure in Hawaii.

Oberstar has been saying much the same for the past couple years, including during a 2008 trip here, when he said he’d fight for $900 million in federal funds for Honolulu rail. Since then, Washington transit officials have said the project is in line for $1.55 billion.

‘The Beauty of Transit’

Civil Beat’s other rail-related piece today is an interview with Gino Antoniello, vice president of Sumitomo Corporation of American, one of the firms that hopes to provide rolling stock for Honolulu Rail. 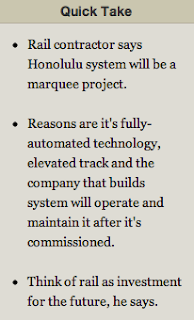 Only a portion of Antoniello’s interview is available to those who aren’t Civil Beat subscribers (same with the infrastructure story), but Antoniello makes a notable point in the public portion. “The beauty of transit” is that “people don’t appreciate it until after it’s built. How did we ever live without it?” he says they’ll ask.
We won’t dip much into the subscriber’s section; Civil Beat undoubtedly would rather that everyone reading Yes2Rail pay up. But we will quote one of the concluding paragraphs in the piece:
“In the end, (Antoniello) said, rail can’t be looked at as a short-term investment. We build transit for the future, for our children.”
Generational Thinking

That’s not all we’re building for the next generations. Ground was broken for a wind farm in the Kahuku hills on Oahu’s North Shore just yesterday. New biofuel projects are approaching start-up, and other forms of renewable energy, including ocean thermal energy conversion, should finally get off the drawing boards sometime this decade.

All of this planning and building is for our children and their children. It’s what responsible communities do – and that includes not backing away from the burden of financing these projects. “We can’t afford it” is simply an opinion that carries little if any weight.

Which leads us to a final thought today. Some in the community, including Civil Beat, are intent on fostering a renewed debate on Honolulu rail at this late date, as if the main issues haven’t been thoroughly analyzed.

The Final Environmental Impact Statement has been delivered to the State for review and, one would hope, acceptance. We can’t imagine anything coming up in a new rail dialogue that isn’t addressed in the FEIS.

But if more Q-and-A is desired, it’s probably in the project’s best interests to encourage it. The more we hear from rail’s chief opponents, the stronger rail's case gets.
Posted by Doug Carlson at 7/14/2010 02:06:00 PM