What the……!? Two positive stories on rail within 72 hours?

First came Thursday’s Council on Revenues forecast for five years of strong economic growth once we get past the current fiscal year. You didn’t find that message until deep into the stories and below the downer headlines, but the overall picture was positive.
Now comes today’s word from City Hall that bids for the first construction phase of the transit project between Kapolei and Waipahu are coming in 10-25 percent under expectations in February, when the request for proposals went out.
Major government projects are experiencing that all over the country, and it’s no different here. (Joni Earl, CEO of Sound Transit, spoke to this point when she was in Honolulu for the June transit symposium.) Two early newscasts carried the item, with KGMB giving video treatment to Mayor Mufi Hannemann’s press conference: 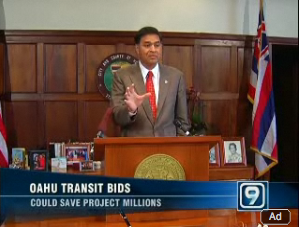 Today's newspaper coverage of the Mayor's news-making press conference is comment worthy. The Star-Bulletin story includes anti-rail comments by a long-time critic who continues in his apparent belief that the current recession will last forever. That's the only way his projection of a financing shortfall could turn out to be the case. Every piece of good economic news, such as the Council on Revenue's forecast and increasing tourism numbers, eats away at his gloomy prediction.

We admit to a jerky restart of Yes2Rail after several months of dormancy. The site’s patina of rust needed more spit and polish than we had anticipated, so we used some of it to polish up a new look to this blog. Now we’re back – and with some pretty good news for Honolulu’s rail transit project:

After a couple years of dismal forecasts for Hawaii’s economy, the state Council of Revenues has issued a five-year tax forecast that anticipates positive long-term growth.

According to today's Council report, Hawaii’s economic recovery will begin in Fiscal Year 2011, which is forecast to see 6.5-percent growth. The report says tax revenues will increase through Fiscal Year 2015, which is the last year in the Council’s five-year forecast window.

The new forecast is good news for rail because general excise tax revenues will provide the local share of the project’s funding over a 16-year period. The GE tax was increased by 0.005 percent in January 2007 on Oahu for transactions by residents and visitors alike. The tax is scheduled to run through 2022.

The City’s financial model for rail anticipates GET revenues of just over $4 billion by that time. When combined with the anticipated Federal Transit Administration (FTA) New Starts funds of $1.365 billion, the total will be enough to build the 20-mile elevated rail system between Kapolei and Ala Moana Center.

The City’s draft financial plan submitted to the FTA on May 1 stirred up a journalist or two, but as Department of Transportation Services Wayne Yoshioka said last week, that’s exactly what the May 1 plan was – a draft. A newer version went to the FTA this month, and the complete project financing plan will be released in the Final Environmental Impact Statement in a month or so.

Some headlines already are highlighting the economy’s forecasted 1.5-percent contraction next year, and that undoubtedly is significant elsewhere in the state. But building the rail project is a 16-year process and requires a long-term view to get the complete picture.

The Council’s report today offered reason for optimism that the picture is going to look good.
Posted by Doug Carlson at 8/27/2009 05:48:00 PM No comments:

Mississippi River Still Rollin' Along to the Gulf 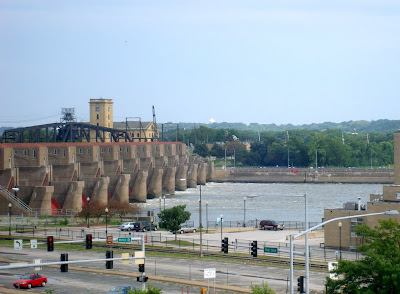 Davenport's lock and dam #15, largest roller dam in the world.
The high school reunion showed us how much things had changed in 50 years, but a look around the hometown showed us some things haven’t changed at all. For example, the river outside our hotel was still flowing left to right this morning when viewed from the Iowa side. (Several hours later, it still was.)

No news there, and that also was our reaction to the main story in today’s Honolulu Advertiser. The story seems like another one of those pieces the paper likes to run about the Honolulu rail project – “view with alarm” stories they called them in journalism school.

Far as we can tell from reading the story twice, the rail project is still going to cost $5.3 billion, so nothing new there. In fact, the only “new” angle in the story seems to be that the paper decided to divide that amount by the number of households on Oahu to come up with a per-household cost.

They could have done that years ago, so it looks like the story’s true purpose was to view the project’s cost “with alarm” as a way of giving space to advocates who favor an at-grade system, which they say would cost less.

The City counters that “an elevated train will be faster, more reliable and cheaper to operate” – not to mention safer, since at-grade systems chalk up injuries and deaths just about everywhere they’re built. It’s inevitable when you mix trains, cars, trucks and pedestrians.

Also not mentioned in the story is the cost of carving out an at-grade corridor through the urban environment. A street has to be widened to retain the same number of vehicle lanes when a rail line is added in the middle of the street. The impact on neighboring properties can be severe.

What truly is worthy of being viewed with alarm is this new effort to deviate from the current transit plan, which has been thoroughly studied and put together over several years. Keep reading, below, for reasons favoring an elevated rail line.

Above-Grade Choice Gets Stronger with Time

The City Council selected grade-separated transit nearly three years ago, and nothing that’s emerged in commentaries, letters to the editor and paid advertising has challenged the soundness of these reasons:

Reason #1: Cross traffic. Trains running at ground level would be slow trains – stopping at intersections, slowing for cross traffic, fitting in with the very congestion an overhead line would avoid.

Reason #3: Impact on neighborhoods. What must you do if you run two rail tracks right down the middle of a street AND keep the same number of lanes for vehicles? It’s obvious; you must widen the street. That means carving up neighborhoods, taking hundreds of properties, damaging small businesses, etc., nearly all of which is avoided by going overhead.

Reason #4: Insufficient carrying capacity. At-grade trains have to fit within the shortest city block on the route. That’s about 170 feet in Honolulu, so our trains would have only two cars if the system were at grade. Honolulu’s planned above-grade trains will be twice as long and carry twice as many passengers. That translates to being more successful in attracting riders.

Reason #5: Operating costs. An at-grade system would cost at least a third more to operate than an elevated configuration, according to the City’s analysis. That’s because each train would require a driver, unlike the fully automated elevated system.

Reason #6: Did we mention safety? This is a major consideration and deserves special consideration when the at-grade issue is broached. Transit systems that operate at ground level must contend with cars, trucks, buses and pedestrians, and accidents are almost inevitable. We will avoid needless injuries and worse by building Honolulu’s rail project above surface congestion.

We’re Back! The Six-Month Break at Yes2Rail Brings Us to the Doorstep of Groundbreaking

“Doorstep” may be pushing it a little, because the schedule to break ground on the Honolulu rail project is still by the end of this year. Let's just say we got a little carried away to be writing about our favorite stimulus package again.

The last words we dropped into this space were about the two closures of the H-1 freeway over the preceding weekend that totaled 15 hours. That’s a lot of down time for the only relatively speedy east-west route through Honolulu.

And that brings us back again to the primary reason this project was conceived, designed and will be built – mobility. We’ve lost it in Honolulu because there’s literally no way you can start a journey across town today and be assured you’ll arrive at your destination on time.

That’s a rough definition of mobility – the ability to accurately predict your time of arrival. Rail will give us predictable arrival times (on a timetable), day in and day out.

And that brings us to the persistent grumblings in some quarters about the three-year-old decision to build a grade-separated transit system here. We’ll occasionally use this blog to tick off the many reasons why at-grade transit won’t work in Honolulu.

But we won’t dwell on it today. There are more positive things to write about, such as the jobs this project will generate once it gets underway, just when Honolulu needs them.

Glad to be back, rail fans, and if you happen to hear some of those grumblings, you might engage in this converation: