Honolulu Rail Project Ends 2020 Like Just about Everything Else Ends the Year – Side-Tracked and Delayed, but with Hope for the Future 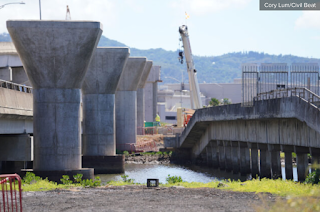 When will Honolulu's elevated rail project be completed?

Yes2Rail’s author has had an up-close-and-personal view of Honolulu’s rail romance since 1990. That’s when I first began working as a consultant to the French transit-building company Matra Transport, one of five firms that bid on Mayor Frank Fasi’s last major push to build an elevated rail alternative to sitting in at-grade traffic.

That effort ended abruptly in 1992 when the City Council failed to pass an increase in the GET to pay for the “local share.” The City wised up when it launched the current project more than a decade later. It handled the local share first, then obtained the federal portion, and then solicited bids to build the 20-mile line from Kapolei to Ala Moana Center.

Like the current project, Mayor Fasi’s version would have covered 20 miles but would have ended at the University of Hawaii campus in Manoa. The cost: $3.2 billion compared to what now looks like a $11 billion-plus investment. Fearless Frank’s train would have been running since 2003.

I mention this little bit of history to show how badly the project has fared in its current iteration. Instead of already giving traffic-maddened commuters on Oahu’s south side a smooth trip to and from downtown for nearly two decades, the project still faces major delays and horrendous cost increases.

The commuting facts of life remain unchanged in the southern corridor. One fact still justifies the project: Grade-separated transit is the only way to predict the time of arrival when you begin your commute -- on time, every time. There will be no Kapolei-to-downtown commuting alternative to sitting in traffic for the rest of this century if rail is not built as originally planned. 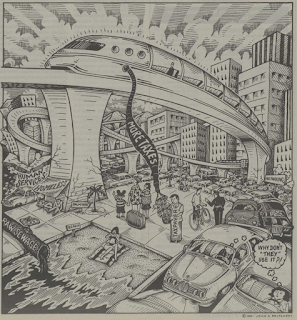 See the lower-right corner? Traffic will NEVER get better.

This anti-rail cartoon clipped from Honolulu Weekly years ago has multiple truths. Taxpayers indeed have had their tax burden increased to support the project. Also true is that the gridlock depicted in the cartoon has only gotten worse.

The project’s four main goals will be as valid in 2021 as they were when originally created more than a decade ago. First among those equal goals is improved corridor mobility.

As 2020 ends today, glimmers of good news shine through the gloom. The federal government has granted the city a one-year extension of the deadline it had set to devise a viable financial plan to complete the build-out. And, the newly appointed leader of the Honolulu Authority for Rapid Transportation has said she supports building the final five miles of the elevated guideway all the way to Ala Moana Center.

With 2020 behind us, rail supporters can at least take some measure of hope that 2021 will be a new beginning for the project – and for just about everything else.