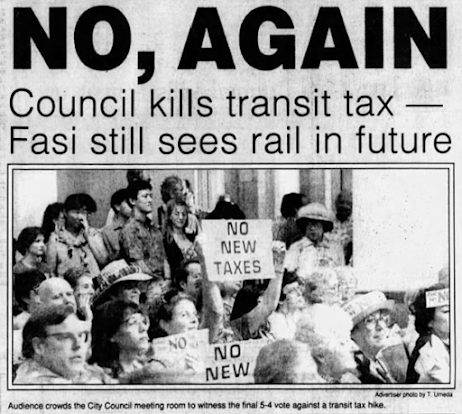 When the City Council refused to pass a tax increase in 1991 to help fund the Fasi Administration's rail project, rail died and would stay dead for a decade. Ending Honolulu's current elevated train construction at Middle Street, as now some advocate, would be another colossal mistake.

Rail has always been envisioned as a relatively fast way to travel between Kapolei and downtown by giving riders a way to avoid highway congestion. Lopping off the final four miles between Middle Street and Ala Moana Center would effectively negate any speed advantage. Transferring from the train to TheBus would be inconvenient and a time-waster.

What was a $5 billion project in the early '90s is now forecast to top out at $12 billion-plus. Traffic congestion also has worsened -- and will continue grow along with Oahu's population and tourism expansion.

Stopping at Middle Street can't possibly be how today's funding shortfall is resolved. Finding new sources of funding is the only reasonable way to proceed -- whether it's by acquiring a tiny slice of the Biden Administration's infrastructure program or by tapping into the resources of Kakaako's landowners and property developers who stand to benefit from the system.

Everything the two Honolulu newspapers' editorials (below) said on October 1, 1992 applies to Oahu's current transportation problems. Let's work to ensure officials don't make another colossal transit mistake 30 years after the previous one. 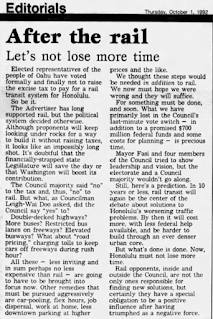 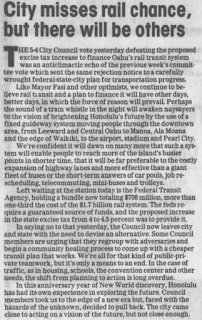 Advertiser and Star-Bulletin editorials, both on 10/1/92

Homework Assignment before Thursday’s TV Show: Read Why Rail Is Still a Must for Honolulu Despite New Challenges 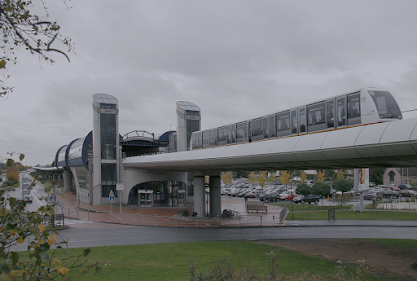 Mayor Frank Fasi arrived in Paris 30 years ago this month at the invitation of Matra Transport, the Paris-based company that would soon submit a bid to build an elevated rail line between Kapolei and UH Manoa.

Fasi and his entourage traveled by train to Lille in France’s north to inspect Matra’s elevated system there. He stood beneath the guideway (pictured above) and asked Matra’s representative when the next train would arrive.

“They’ve been passing overhead for several minutes,” was the reply by John Marino, Matra's North American marketing director. Fasi was shocked he hadn’t heard those trains, so quiet was the system.

Matra didn’t win the bid to build Honolulu’s $3.7 billion project. Another consortium did, but the project died in 1992 after the City Council defeated by one vote a local tax to help pay for the project.

Today, Honolulu’s resurrected system is miles shorter and vastly more expensive than the plan pursued by Frank Fasi, a rail champion across the decades. Honolulu officials and citizens now debate whether it’s worth it to fund the final four miles of the line.

The Need Has Never Changed

Ending construction at Middle Street would slash billions from the project’s cost, but doing so would cripple the effort to build a relatively fast transit line between residential communities in West Oahu and Honolulu’s employment center downtown.

Thursday night’s “Insights” program on PBS Hawaii’s TV channel will be devoted to “Honolulu’s Rail System – Where Are We Now?” Citizens might well prepare for that show by reviewing the rationale to build grade-separated transit along Oahu’s southern corridor.

An exhaustive planning study by the University of California, Berkeley examined why Honolulu is well-suited for elevated transit. The study is several years old, but the case for building a travel alternative to the automobile is unchanged. The study’s introduction notes:

Ending the line at Middle Street would match rail critics’ description of Honolulu’s current project, but leaving that argument aside, Honolulu residents might well scan the Berkeley document for its scholarly assessment of the need for rail transit here. Then watch “Insights” on Thursday at 8 p.m.

Yes2Rail’s own background site is linked at the Aggregate Site in the right column above. Especially recommended are the project’s goals.

We also propose a rallying cry at this critical stage of the project:

Rail Enjoys New Push for a Final Resolution, and the Only Sane Path Is Completing the Project as Originally Envisioned 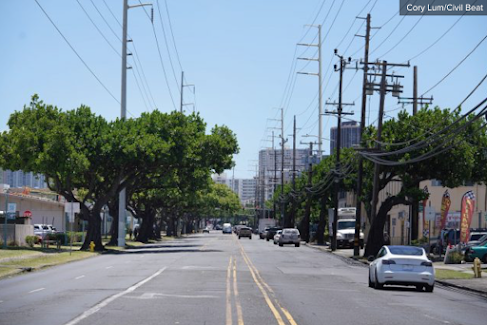 Civil Beat reports on the “Mauka Shift” – the proposal to move the elevated rail alignment from the center of Dillingham Boulevard to the mauka side of the thoroughfare.

The shift presumably would reduce the complications of relocating miles of utility infrastructure beneath and alongside Dillingham. It’s become a Gordian knot-like problem for HART.

According to legend, Alexander the Great tried but failed to untie the fabled knot. His solution was to atop the untying and start the cutting. He sliced the knot in two with his sword. “It makes no difference how they are loosed,” he said of the rope tangle.

The Mauka Shift appears to be HART’s solution to untangling the utility infrastructure. Just move the alignment.

You get the feeling the logjam is about to break, and the timing couldn’t be better. The new President is pushing for a $2 Trillion infrastructure improvement and rebuilding plan. HART is vowing to cut the Dillingham Knot, and the public engagement process is picking up.

PBS Hawaii’s “Insights” program has scheduled another rail program for April 29 at 8 p.m.: “Honolulu’s Rail System – Where Are We Now?”

Let’s hope Thursday’s rail discussion is enlightened and not bogged down by unproductive suggestions to kill the project, and what – leave 15 miles of guideway and support structures as a perpetual reminder of failure?

No, rail needs to be built at least into downtown to satisfy rail's original goals, including restoration of mobility along the southern corridor.

“I propose taking one option off the table regarding rail. For the sake of clarity, stop any consideration to end this project before it is built out at least to downtown Honolulu. Use the Mauka Shift if that becomes a necessity, but build rail to a useful conclusion. Traffic is worsening by the day, let alone in future decades. Grade-separated transit is the only alternative to being stuck in that traffic. Rail won’t “solve” traffic; short of draconian policies, nothing will ever solve traffic. But rail will be the option to avoid traffic for those who choose to ride it.

Great Britain untied itself from Europe behind the simple “Get Brexit Done” slogan. That disengagement was far more complicated than building four miles of elevated guideway along Dillingham Boulevard.