Checking Out More Yes2Rail Posts in the Rear-View Mirror: Some People (Who Should Know Better) Still Express Enthusiasm for At-Grade Rail, so Let’s Review another Rail-Related Big Issue – COLLISIONS 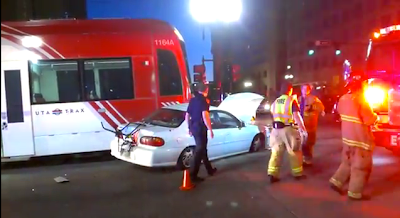 Honolulu could expect crashes like this if rail were built at ground level.
If you’ve read it here once, you’ve seen it dozens of times: Only grade-separated transit can provide fast, frequent, reliable and safe travel through the city – each time you ride.

Elevated rail will be faster that any surface-based transportation system, no matter what anti-railer-in-chief Cliff Slater says. Rail will be more frequent – arriving every 3 minutes during rush hour – and it’ll be more reliable by never ever being involved in crashes with other vehicles at intersections. The are no intersections when the line is elevated above traffic.

And that’s where we’re landing today – smack dab on the Safety issue. It’s no surprise people who oppose Honolulu rail avoid talking about the safety issue at all costs. They just don’t have an answer for it.

We’ve tried calling them out on the safety issue, and we banged away pretty hard in 2010 around the time Governor Linda Lingle held her “public hearing” on rail in the State Capitol. It was a staged event to highlight her opposition to rail and support for an at-grade rail version supported by some in Honolulu’s architect community.

Our headline on January 15 declared At-Grade’s Drawbacks Can’t Be Airbrushed Away. The post’s eight bullet points detailed the obvious drawbacks of running light-rail trains on Hotel Street through Honolulu’s downtown section, including super-crowded Chinatown. It’s impossible for anyone except the most ardent at-grade supporters to imagine such a scheme. Look at the photographs in that post and come to your own conclusion.

The January 29 post deserves some extra attention because it reported on details of the AIA chapter’s internal poll among its members on the rail issue. We wrote:

“Another way to parse these numbers is that nearly three times as many respondents favored grade-separated rail (96) compared to at-grade (35). So how can the AIA Rail Task Force members go before the community with a straight face and say at-grade rail is such a favorite among local architects?”

As we noted in that post, only 24.3% of the respondents supported at-grade rail, 38.2% said rail should be built below ground, 28.5% said elevated was best and the rest didn’t care or failed to give a response. We summarized: “75.7% of the respondents chose not to select at-grade rail – a remarkable outcome in light of the chapter’s campaign in favor of that option.”

Consider the Crashes
The photographs in Yes2Rail’s right-hand column don’t lie. They’re the images of what happens when at-grade rail transit is inserted into a city – any city. It’s never a good idea when trains, cars, buses, trucks and pedestrians try to occupy the same space.

Even the newest rail systems with tons of lessons learned from other rail-equipped cities around the country can run into trouble. One year ago, Norfolk, VA launched The Tide, its relatively short at-grade rail system, and recorded its first accident – before the system officially began service!

Our August 12 post was headlined Yet To Open, Norfolk’s Train Has First Car Crash. Check out also this TV station report following that accident that examined all the bells and whistles the at-grade system uses to alert motorists and pedestrians that a train is approaching. Listen to those horns and be thankful Honolulu's system will be elevated, with no need for warning sounds!

But that was just the beginning. A second collision was recorded a few days later during the “practice” sessions with the new system. WAVY-TV carried two video reports on that collision, here and here.

Sacramento’s system was the subject of our Jogging & Keeping Pace with an At-Grade Train post on September 19, 2009 that focused on the system’s relatively slow speed compared to Honolulu’s future elevated system.

California’s capital city has had its share of crashes, too. KCRA-TV carried this breaking-news report on March 29 this year on a two-car, one-train crash near downtown Sacramento. Tragically, three died at a Sacramento Light Rail road crossing early this year.

Salt Lake City, UT? Check out this report on a teenager's death and other videos depicting the TRAX system’s numerous crashes and fatalities – at least 7 deaths over a four-year period. The chart at right was included in a TV station’s report that compared the city’s operational record with other at-grade rail systems in the western region of the country.

Phoenix, AZ? Our December 2, 2009 post – Train Meets Van in Another At-Grade Rail Collision – reported on the growing number of crashes involving the city’s new 20-mile system that recorded 52 accidents in its first year of operation.

And still some prominent people in Honolulu believe at-grade rail would be a good idea for our city. Will they be asked to defend that preference in light of at-grade's poor safety record compared to elevated rail? Is preserving a view plane worth a single life, let alone many? Don't elevated rail's fast, frequent, reliable and safe attributes matter? Of course they matter. Maybe you'll have a chance to ask those prominent people in the weeks ahead if their transit preferences compare favorably with Honolulu's future elevated rail system that literally above all will be safe.

But it would be so much prettier! Who cares if it's dangerous, causes traffic snarls, and would require a whole new EIS that would set the whole thing back years? The only thing I care about is the view.

The crazy thing here is Cliff Slater and friends brought a federal lawsuit against the very BRT system Ben Cayetano is promoting. Cliff Slater also wrote a piece that condemns light at-grade rail which he said will create similar traffic congestion problems as BRT. I wouldn't be surprised to see Cliff Slater and friends bring a federal lawsuit against a light at-grade rail system, a system Ben Cayetano said he might consider. For those who don't know Cliff Slater is one of Ben Cayetano's senior transportation guru's. The news media has never mentioned this crazy coalition of transportation kooks are kooks.

To Anonymous, above: I love your tongue-in-cheek suggestion that views are more important than safety. Yet that's what some believe in insisting elevated rail potential to block one's views up close (but not at a distance; buildings do that) is a non-starter and that at-grade rail is better. Check out Yes2Rail's January 18 and 29, 2012 posts.

Roy, thanks for your many comments here at Yes2Rail, and once again, you have it exactly right. Slater is driving the Cayetano campaign, and that's undoubtedly what the relationship will be after no candidate receives 50% plus 1 vote on August 11th -- three more months of Slater-driven misinformation and obfuscation. And people still wonder why thepublic is turned off by politics....

Perhaps bus riders should be worried if Slater is Cayetano's Transportation advisor. He always felt public transit should receive as little public money as possible, so TheBus could possibly suffer from neglect once Cayetano gets settled in the Mayor's office.