Anti-Rail Forum was Big on Stats & Scare Tactics, Scarce on Ways To Give Oahu Commuters Relief, Plus: Calling Out Opponents on Their ‘Big Lie’ 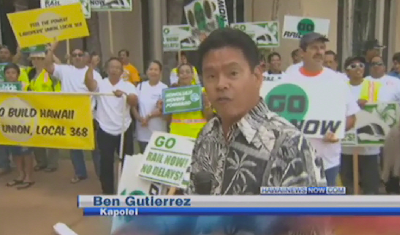 
“PowerPoint presentations were no match tonight for good old-fashioned chanting. On one side, a panel of rail critics with their charts and graphs. On the other, west side families who say, ‘Enough talk already. Let’s get this train built!’”
The presenters managed to avoid the scores of chanting rail supporters in front of Kapolei Hale, including representatives of Oahu’s youngest generation (below), by entering the building through a side door. By the time the meeting started and some of the rail supporters had come inside to watch the canned performance, the audience totaled less than 50.

Subtracting out the pro-rail people, the presenters and Stop Rail Now organizers who attend all rail events left maybe a dozen “unaffiliated” citizens in attendance, which doesn’t say much for the alleged anti-rail fervor in the community allegedly uncovered recently by a flawed public opinion survey.

The visitors shoveled a blizzard of statistics at the audience in their PowerPoint slides, suggesting once again that you can prove just about anything if you have enough statistics. That’s essentially the theme of the book How To Lie with Statistics, which has been on high school and college reading lists for decades.

You also can scare the bejesus out of people with stories of rail’s alleged failure in mainland cities and the costs of Oahu’s needed infrastructure improvements, but in the end, left unmentioned in the presentations was rail’s key deliverable:


Rail will give users congestion-free travel through the city.
Chevy vs. Lexus
Heard more than once, however, was this generalization: “The only statistically proven way to reduce road congestion is to expand highways lanes,” which is a close paraphrase of the HOT lane advocate's main pitch last night.

Adrian Moore of the Reason Foundation “proved” with his statistics that high-occupancy toll roads are not Lexus Lanes that serve only the well-to-do. He or someone else “proved” this by writing down the makes of cars being driven on toll roads and surmising that Fords and Chevys are driven by poorer people – hence, even poor people use HOT lanes.

John Charles of Cascade Policy spent virtually all his time showing how transit oriented development has allegedly failed in Portland, OR and therefore will fail here, too. That’s the implication, but despite all the stats about mainland travel and references to things that didn’t work out so well there, the canned presentations avoided the realities of space and transportation on Oahu.

Nobody stepped up with graphics or anything resembling a concept that could inject HOT lanes into Honolulu’s urbanized environment – just vague references to a managed lane “proposal” that’s really no proposal at all.

The whole island is still waiting for anti-rail Ben Cayetano, who announced his mayoral candidacy six weeks ago tomorrow, to articulate details of a transportation plan that he’d pursue instead of rail. A Dick Adair cartoon in MidWeek unintentionally made this point; we know what Mr. Cayetano is against (in his left hand) but have no idea what he wants (the empty right hand).
Population and Traffic
Randal O’Toole of the Cato Institute flooded the audience with statistics to “prove” transit is failing to attract riders even as cities grow. For example, he said the population in Atlanta, GA has doubled since the 1980s, yet transit’s share of trips taken by residents has fallen by half.

That’s it – no further explanation required, Mr. O’Toole reasons, yet that’s exactly the result you’d expect when suburbs are built that require continued dependence on America’s car culture for mobility.

Oahu’s population growth is being channeled to west Oahu, a region bordered by mountains and an ocean, unlike Atlanta and Houston and other mainland cities mentioned in the visitors’ statistical presentations. Left unaddressed by these highway advocates is Honolulu’s unique long and lean layout that transit experts for decades have said is ideal for a rail transit system.

But the underlying statistical snow job within all the presentations last night can be heard locally, too. We call it:


The Big Lie
It was heard as recently as this morning on Honolulu’s #1 radio station: Building rail will not reduce traffic congestion. Mr. Cayetano has picked up anti-railer-in-chief Cliff Slater’s main talking point, and forum moderator Panos Prevedouros used it last night: “No city in the world has reduced traffic congestion by building rail.”

If that’s true, it’s therefore also true that building more highways hasn’t reduced traffic congestion either. Congestion increases with the growth in population and vehicles, and even adding more highway lanes results in "induced traffic" on them. It’s not a difficult concept, so why is it so hard for talk show hosts to understand?

Using the same reasoning, it’s also true that no city in the world has reduced its solid waste volume by building more sewage treatment plants. It happens!

So it went with last night’s rhetoric (it’ll be repeated at noon today in the City Hall complex), much of which deserved to be shredded and left in a statistical waste dump for all the relevance it had for Oahu residents. We’ll have more tomorrow on what motivates these “hired guns” to show up all over the country with their anti-rail dog-and-pony shows.

And showing up in Kapolei wasn’t easy. The photo below was taken on our drive from town to the forum and illustrates what commuters living on the west side deal with twice a day. Note the bus creeping along with the rest of us in the high-occupancy-vehicle lane.