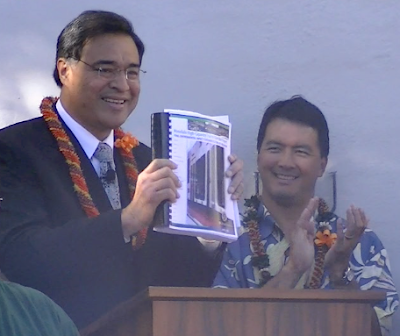 Environmental law requires this review and acceptance by the Governor before the FTA can issue a Record of Decision, which will clear the way for groundbreaking and the eventual employment of thousands of Honolulu citizens to build the system.

Speaking to a crowd gathered before the City Hall’s steps at 5 pm, Hannemann said the FTA’s action concludes the EIS process, which began years ago. The FEIS contains comments from hundreds of individuals and organization that were submitted in response to the release of the Draft EIS in November 2008. The FEIS includes all of those comments and responses from the project.

Hannemann said the FTA action is a crucial step on the way to final action on the rail project, which will benefit Oahu residents for generation to come. His statement read:

“I am so very proud to be a part of this historic day in Honolulu. With the release of the rail transit Final EIS, we are poised to move forward with rail transit, create jobs and deliver long-term traffic relief to commuters and businesses between West Oahu and town. The document is the result of five years of public input, in-depth consultations with stakeholders and meticulous technical research. With such a thorough planning process, we are confident the document accurately indentifies environmental, community and economic benefits and impacts of the rail system and proposed solutions.”
Now What?

The laws that require environmental impact statements are pretty clear on what the next steps should be. With the FTA’s transmittal of the FEIS to the State, the document is now formally on the way to the Governor’s desk.

Under the law, the Governor must evaluate the completeness and adequacy of the FEIS insofar as environmental, historic and cultural issues are concerned. Hannemann said in remarks published over the weekend that he believes rail will be stalled until a new governor is in office.
"With rail, it is not a question of if, it is a question of when. I am convinced Gov. Lingle will not move rail beyond her desk as long as she is there; it is one of the motivating factors why I feel I have to run for governor."
But the Mayor set aside those concerns today and called on the Governor to accept the FEIS:
“Do what you must, Madame Governor, but at the end of the day, please do what is right for the people of the state of Hawaii, not just the City and County of Honolulu.” 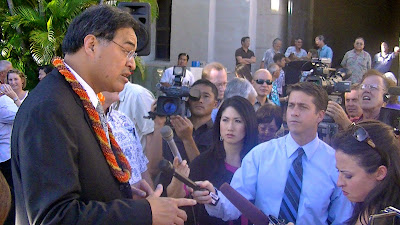 Hannemann meets with reporters following his announcement.
Hannemann passed around the Mahalos:
“I want to thank our Congressional delegation – Senator Inouye, Senator Akaka, Congresswoman Hirano and yes, even ex-Congressman Neil Abercrombie (his opponent in the gubernatorial race). Strong federal support is on its way because of their leadership. And I’d be remiss if I didn’t thank our local-boy president, President Barack Obama, and the Federal Transit Administration and the Department of Transportation and the federal government for their cooperation and support to put forward what Congressman Jim Oberstar has said (is) the best transit project in America!”
So there it is, the culmination of a long process to bring the Honolulu rail project to this point, with even more yet to be accomplished – if not this month or next, presumably by December. We'll post links to an online version of the FEIS soon. Here’s a sampling of media coverage of today’s event as of this evening:
• Pacific Business News
• KITV
• Hawaii News Now
• Associated Press (in the Honolulu Star-Advertiser).
Posted by Doug Carlson at 6/14/2010 07:28:00 PM