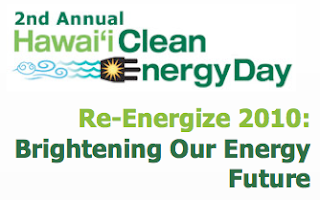 What would Hawaii’s Second Annual Clean Energy Day be without the presence of Honolulu rail, which will remove tens of thousands of cars from the streets and highways once it’s built?
Less than complete – that’s what it would be, so the City will have a display at the event tomorrow, 1 – 6 pm at the Laniakea (Richards Street) YWCA in Honolulu.
There's no way to ignore the contribution Honolulu rail will make to the island’s sustainability. The current estimate is that 100,000 or more daily passengers will ride rather than drive 30,000 or more cars.

The public is invited to “come and participate in vigorous discussion on the next steps Hawaii needs to take to achieve our clean energy objectives!” We’ll be there, too, answering rail questions during the Pau Hana Power Party, 4-6 pm. Look us up!
Posted by Doug Carlson at 6/03/2010 12:50:00 PM