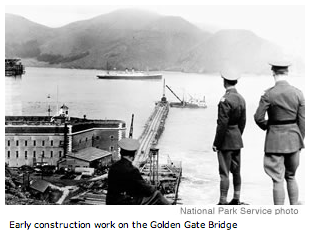 We had to put quote marks around the headline because it sits above a column by Bob Jones in the new edition of MidWeek.
Jones notes the similarity between the resistance some are showing to the Honolulu rail project and the balkiness in certain San Francisco neighborhoods over construction of the Golden Gate Bridge. He writes:
“People resist change and major public works projects, and in Hawaii we have resisted more than most. I’m reminded of how many said the $25 million cost of the Golden Gate Bridge in the ‘30s would break the city.”
Jones also suggests that “most San Franciscans cannot imagine their city today without the Golden Gate Bridge. I suspect that 20 years after our train we’ll not only wonder how we lived without it but will be looking at its extensions to Mililani and Hawaii Kai.”

We think long-time local scene observer Jones has it right. The hand-wringing about Honolulu’s alleged inability to afford rail is backed up by person opinion and little else. Or if you do find an anti-railer who tries to make a detailed argument, the reasoning becomes too tortured to be taken seriously.

Jones nails it: More roads and freeway flyovers as alternatives to Honolulu rail would simply put off the inevitable gridlock.