Governor-Elect Neil Abercrombie’s first post-election remarks on the Honolulu rail project signaled a sharp departure from the outgoing governor on what his responsibilities are on rail's Final Environmental Impact Statement.

Governor Linda Lingle said she wouldn't evaluate the FEIS until first concluding a $300,000 study on the project’s financial plan, a review that isn’t likely to be completed by her last day in office on December 6. At a news conference yesterday, Abercrombie said such a review goes beyond his legal responsibilities. 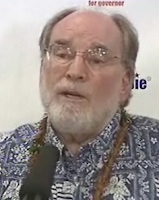 “I’ll look at it, but the governor really doesn’t decide that,” he said. “That’s decided by the City Council, the mayor and the Federal Transit Administration. Honest, that’s the way it works.”
Lingle’s insistence on reviewing rail’s finances was broadly interpreted as a cover for her opposition to the plan promoted by political rival and former Honolulu Mayor Mufi Hannemann, an assessment nurtured by her many non-supportive statements.
They included her comments in a long public television interview in March in which she continued to express a preference for an at-grade system, which transit experts say would not satisfy the project’s goals.

She as good as hosted a State Capitol forum in January that featured a plan by a faction of local architects for an at-grade rail system (see Star-Bulletin, Yes2Rail and Honolulu Advertiser coverage).

Several websites have commented on what Mica’s agenda is likely to be and have concluded that transit projects will continue to have the committee’s support. One quotes him:

“Well….if you’re on the Transportation Committee long enough, even if you’re a fiscal conservative, which I consider myself to be, you quickly see the benefits of transportation investment. Simply, I became a mass transit fan because it’s so much more cost effective than building a highway. Also, it’s good for energy, it’s good for the environment – and that’s why I like it.”
Those are a fiscal conservative's views that we like! (Here's more on Mr. Mica's transportation priorities.)
Posted by Doug Carlson at 11/05/2010 08:33:00 AM