Oh, brother. What a drubbing Hawaii is taking from Boise State. Thankfully, Honolulu Magazine just arrived in the Saturday mail, and it contains a good diversion.

And we gotta say it: The November issue gives us another “oh, brother” moment. Editor A. Kam Napier apparently can’t let go of his suggestion first floated in September that Honolulu’s transportation needs can be satisfied by creating a personal shuttle service.

“Imagine a network of on-demand shuttle buses,” he wrote back then. “From your home or your phone, you send the network a request to go somewhere….” Our reaction to his “retro” idea -- reminiscent of the Popular Mechanics issues of the 1950s – was to dub it the Shaxi-Pool, a combination of shuttles, taxis and car pools.

Mr. A. Napier responds in November to a letter that asks “why can’t Kam Napier cite even one city where it exists?” The writer continued, “For every rail ‘failure’ such as L.A., I can show Mr. Napier five complete rail success stories.” The editor's comment refers readers to Wikipedia and 28 jitney services around the world.

But Not in Honolulu 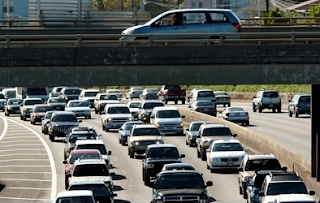 This is Oahu’s transportation problem, Editor A. Napier – traffic that clogs the H-1 freeway and surface streets morning and night and often at noon. Honolulu residents have lost true mobility – the ability to move through the east-west corridor unimpeded by traffic congestion.
You put your shuttle, taxi and car pool idea into service and they’d all be caught in the same traffic that now brings tens of thousands of drivers to a halt every weekday and often on weekends. Only grade-separated transit – like Honolulu’s rail project – can give users true mobility.
We know Honolulu Magazine has a dim view of rail transit, but just like HOT lanes, the magazine's Shaxi-Pool concept with jitneys and shuttles would not deliver what we need – fast, frequent, reliable and safe transportation through our city.
Let's hope Honolulu Magazine finally shelves its retro idea and leaves the jitney concept to cities where it actually might be useful in addressing their primary transportation need. Honolulu isn't on that list.
Posted by Doug Carlson at 11/06/2010 01:27:00 PM