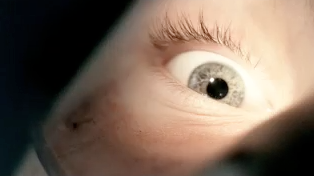 An image from a Montana Meth Project video.
This is a Honolulu rail website, but any local transportation-related condition that has degraded to unacceptable depths and nearly predictable fatalities deserves space here and elsewhere.

Oahu’s 2010 pedestrian death count is 19, nearly double last year’s total. A dozen of those fatalities were pedestrians in marked crosswalks. Every one of them was a family tragedy.

Pedestrians get no respect on Oahu, and now authorities say they're going to launch a campaign to change driver and pedestrian behavior. But is traffic enforcement alone the way to achieve that change?

More patrols citing more speeders, red light runners and illegal turners might help, but street enforcement is after the fact – after the speeding, running and turning. As a society, we need to prevent that behavior before it even starts.

A full-on multi-media campaign would complement the Police Department’s stepped-up enforcement. Are we ready to launch one similar to the Montana Meth Project? You’ve seen the videos on TV and in theaters.

Eliminating pedestrian fatalities is the goal. Getting there may require more than one tactic.
Posted by Doug Carlson at 11/30/2010 10:15:00 AM