For a guy who claims to be an international traveler, Dennis Callan seems remarkably unwilling to do what people do in cities all over the world – walk! 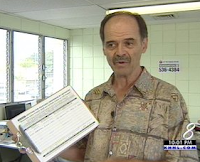 Mr. Callan was the co-founder and co-chair of the Stop Rail Now group that failed to stop rail in the 2008 election; that’s him at right delivering an anti-rail petition to the City Clerk’s Office four years ago. He’s still fighting rail as a frequent contributor to anti-railer-in-chief Cliff Slater’s HonoluluTraffic.com website, and he’s been writing commentaries for any publication that will publish them for years. In its January 2009 edition, Hawaii Business carried his pessimistic views on transit-oriented development.
His commentary in today’s Honolulu Star-Advertiser (subscription required) also doubts the viability of Honolulu rail because of the city’s allegedly too-low population concentration near rail stations. The piece is a cleaned-up rehash of Mr. Callan’s letter to the Sierra Club after the group said it would openly endorse the Honolulu rail project.

We dealt with his low-density argument two weeks ago by quoting from the Flawed Urban Rail Arguments website – a handy source of information to refute rail opponents’ arguments. Population density isn’t a determining factor of a rail system’s ability to be effective, the site says. “Rather, it is traffic density – the amount of people traveling along a particular route – that’s important.”

Since all drive-time travel between the ewa plain and town is through the narrow east-west urban corridor, Honolulu’s traffic density is extraordinarily high, and that’s why the city was recently designated as having the worst traffic congestion in the nation.

The Silly Part
The most remarkable aspect of Mr. Callan’s piece today that deserves special attention isn’t the density issue, which is just more of the same material he’s been pushing for years.

The most remarkable content is his conclusion that waiting, walking and riding transit amounts to “a complicated journey” – too complicated for Oahu residents. Here’s the best part of his piece, supplemented by our comments after each of his trip segments:

Because of this current lack of residents near stations, the city is hoping that Leeward commuters will ride a bus and transfer to the train. But consider how many individual segments such a daily round-trip would involve:
• Walk from your home to the bus stop. Once rail is in place, reconfigured bus routes will enhance TheBus’s attraction as an efficient way to reach the nearest station.
• Wait for the bus. Regular bus riders will know the schedule and won’t wait long.
• Ride the bus to the train station. The ride will be short compared to fighting miles of stand-still traffic on the H-1 or other highways.
• Walk to the train. The bus stop will be at the station, just steps away.
• Wait for the train. During rush hour, trains will arrive every 3 minutes, and the headways could be shortened if demand becomes strong enough.
• Ride the train. Yes! Ride the train, avoid all surface congestion; read, work on a computer, sleep or just enjoy the scenery.
• Walk or bus from train to work. The final leg of a money- and time-saving commute.
Now do everything in reverse to get home: round-trip segments involving a lot of walking, waiting and transferring. How many people would be willing to make such a complicated journey?

Hundreds of millions of people make this kind of trip each day all over the world; frequent traveler Dennis Callan knows this to be true, yet he imagines it just can’t possibly work on Oahu.

He and his fellow stop-rail friends are positioning transit commuting on this island as too onerous for our population – too “complicated” for individuals to embrace even though Oahu commuters already pay some of the highest prices for gasoline in the country.

They already have the worst traffic congestion, and judging from my recent experiences in Sacramento, CA while buying groceries, subscribing to cable TV and Internet services and signing up for a new health care plan, they’re paying much more for all of that, too.

The Insulting Part
Mr. Callan essentially argues that Oahu residents are too lazy to adopt a new commuting pattern that will give them financial and life-style benefits. That’s bad enough, but then he concludes his commentary with the specious argument we’ve come to expect from the anti-rail crowd.

Mr. Callan’s final sentence mentions “real solutions or other pressing infrastructure needs” that he implies would somehow reduce traffic congestion for decades to come. It’s yet another insult to Oahu residents’ intelligence to suggest there’s a magic bullet out there just waiting to be implemented if only rail can be killed.

If you believe that, you may also believe walking is bad for you.

Here’s the bottom line: Only rail will give users a congestion-free trip through town while reducing traffic’s growth rate on our streets and highways. Mr. Callan and his friends won’t tell you that.
Posted by Doug Carlson at 7/25/2012 08:14:00 AM

Callan's nasty attack on the Sierra Club for even thinking of supporting rail, and his insistence that Honolulu should become more like the European cities he frequently visits, even though they have nothing in common with Honolulu, shows how smug, arrogant and out of touch many of hysterical rail-haters really are. DUH, Callan!

Regarding Callan's credibility: I was chief photographer at the Star-Bulletin when Callan submitted a travel photo for a story we were publishing. The photo came across my desk and immediately alarm bells went off. I went to the editors and told them it was a fake.

I told them it was a sunset photo of the Grand Canyon. We see the sun on the horizon. So what's lighting up the canyon wall in front of us? Either Callan has a very powerful flash, or there was nuclear weapons testing going on when he tripped the shutter.

If it's a real sunset shot, that canyon wall should be dark. Not lit up.

The photo was pulled. I wasn't about to allow a misleading photo be published in our newspaper, even if it was for the travel section. We did composites for specific purposes, but we clearly labled them as photo illustrations to ensure no one was misled about the content.

If Callan can't come clean about something as simple as a travel photo, what else would be at risk of being tainted?