More from the Letters Page: Rail Will Indeed Reduce Road Congestion, but What about the Enthusiasm for At-Grade Light Rail? Don’t They Know It Kills People? 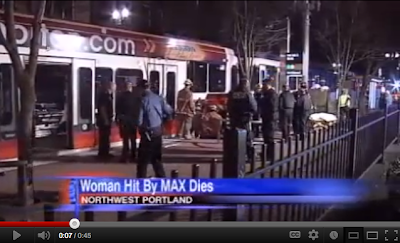 Portland's MAX at-grade system records another death.
Tired of all those campaign ads on TV and radio? Looking for messages that aren’t approved by a candidate? For a change of pace, stop by at the Letters to the Editor page of Honolulu’s only daily newspaper.

Yes2Rail has done that numerous times over the months and does it again today to make a point: What you read there may have some value, but like so many of those campaign spots, they may leave out important facts. Here’s an example from today’s paper (subscription).

But first, a Yes2Rail Disclaimer: The following letter is quoted for educational purposes only and appears exactly as printed in today’s Honolulu Star-Advertiser. Its inclusion in this post does not imply support or criticism by Yes2Rail of any candidates in the Honolulu Mayoral race. As for Richard Borreca's column today, we'll get to it tomorrow to see if our January prediction is still holding true – that he'd write not one paragraph of positive comment about rail in 2012. Spoiler Alert: Don't hold your breath.

Cayetano is not against all rail (Honolulu Star-Advertiser, 7/31)
In the rush to give the nod for the mayor’s race to Kirk Caldwell (“Top city post should go to Caldwell,” Star-Advertiser, Our View, July 29), the Star-Advertiser conveniently overlooks what former Gov. Ben Cayetano has stated many times.

He advocates building a much less expensive light-rail system that is at ground level, similar to the MAX system in Portland, Oregon. Actually, It’s Kirk Caldwell whose rail plans are murky. He says he wants to change the design and some routes but has given no details on either. It is important to make sure that candidates are carefully vetted on what they say they will do, not on what we want them to say.

The Kailua resident who authored the letter makes a good point: Candidates’ preferences for addressing Oahu’s growing traffic congestion issues need careful scrutiny and vetting. As an educational tool about Honolulu’s planned elevated rail system, Yes2Rail has traditionally compared the current plan with the alternatives proposed by others in the community.

For example, Cliff Slater and Panos Prevedouros have advocated for High-Occupancy Toll (HOT) roads, and our commentaries have positioned elevated rail as superior to those roads. The above letter implicitly supports construction of a light-rail system – something akin to what Portland has built. Let’s take a look.

Death on the Rails
Light-rail transit kills people. It happens everywhere trains are built at ground level in the mix of trains, vehicles and pedestrians.

Sacramento, CA, our new home since last month, recorded a three-fatality tragedy early this year, and SaltLake City has recorded several fatalities. But since Portland’s MAX system was suggested in today’s letter as something Honolulu might well build instead of grade-separated rail, that city’s safety record is ripe for examination.

Portland has recorded at least two dozen deaths on the MAX system since 1986. The most recent fatality listed at the Summary of MAX Fatalities website – number 26 – was in January 2011, but another web source puts the number at 28 through June 2011. A Portland TV station carried a video report from which the graphic at the top of today's post was pulled.

Whatever the true number, the point is obvious: At-grade trains pose a lethal threat to pedestrians and vehicular passengers, and one can imagine the threat as exceptionally significant considering Honolulu's aging population. “But all travel has risks,” light-rail defenders may say. Honolulu rail supporters can counter with this accurate statement:

By being elevated above street level, the possibility of pedestrian-train interaction will be completely eliminated. There will be no crosswalks, no intersections and no possibility of vehicle and pedestrian accidents as shown in the numerous photographs in our right-hand column.

Those are the facts about light-rail’s safety compared to Honolulu’s future elevated line – an issue you haven’t read about in recent months in Honolulu’s only daily newspaper.

Another Letter
Let’s end on a lighter note today by quoting from a second rail-related letter in today’s Star-Advertiser:

Rail satisfies many needed social goals (Honolulu Star-Advertiser, 7/31)
We would like to make some key points that we think are overlooked in the discussion about rail. First, it is flat wrong to claim that rail won’t reduce traffic congestion. Congestion might not be reduced across the island overall, but rail is going to reduce the increase in congestion. (Yes2Rail comment: This is the same point made here last week.)
Second, Oahu citizens have long gone along with developing the “second city.” Now that it is heavily populated, its residents deserve a proper transportation infrastructure. Rush-hour traffic to and from the west side is horrendous and by far the worst on the island.
Third, rail will benefit those who cannot afford cars. It will provide a much quicker transit, for example, for those who provide all the tourist services in Waikiki that generate tax revenue benefiting us all. Our political culture has rested on bedrock principles of fairness and looking out for the little guy; are we now abandoning those principles?

Transportation equity, one of rail’s four main goals, was Yes2Rail’s subject as recently as July 27. We’re pleased the two Kaneohe residents who wrote this letter appreciate equity as a bedrock principle of the Honolulu rail project.

There you have it – two letters that could be launching pads for further exploration for anybody who cares to know the facts about Honolulu’s future fast, frequent, reliable and safe elevated rail system.
Posted by Doug Carlson at 7/31/2012 06:53:00 AM

The best piece I ever read about the deadliness of at-grade Light Rail Transit is "Killing Time on the Ghetto Blue," referring to the busy L.A.-Long Beach light rail line.
Even though it is only a revival of a former four-track Pacific Electric mainline, the "Ghetto Blue" has killed over 100 people since 1990 in over 800 collisions, including motorists, cyclists, pedestrians, and even passengers entering and leaving the stations.

A friend of mine was living in Calgary while their light rail system was being built for the Olympics. Like Honolulu there was much opposition to rail there. She said after it was completed people were getting run over left and right in town where it was at grade. The death rate decreased after a while when people got used to the speed it was traveling at. While people there now like rail it still occasionally runs into cars, trucks, buses and people which brings the system to a standstill. Because our system will be elevated it will provide reliable, predictable and efficient service to it's riders.

Just looked this up. Since the Calgary light rail system opened up thirty years ago there have been 66 fatalities. Those people killed were someones mother, father, son or daughter. Light rail is not right for Oahu.