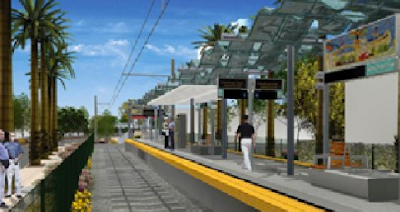 That “way” is on the ground, the same level used by pedestrians and vehicles, and the controversy is worth noting here in Honolulu, where some still advocate ground-level transit. South LA neighborhood residents see the potential for “catastrophic” conflicts between trains and local youth.

As reported in the L.A. Watts Times, former Metro light rail operator Lester Hollins “has attested to some of the dangers of street-level crossings. While operating a train on the Blue Line, Hollins was involved in an accident with an ambulance. ‘The professionals can’t co-exist with the trains. So, how can we expect the kids to?’ Hollis said.”
Metro Line officials have said appropriate safety measures will be implemented to enhance at-grade safety, including safety cameras, bells and flashers, vehicle and pedestrian crossings with gates, and more.

All of which will be unnecessary on Honolulu’s system, which will be built above grade and completely free of pedestrian and vehicular cross-traffic. It's something to think about the next time you hear someone advocate an at-grade system for Honolulu.
Posted by Doug Carlson at 8/06/2010 05:03:00 AM

totally agree. It's ludicrous to build a train system on the ground near school or other areas that attract lots of pedestrians.

I shudder to think of the number of accidents and fatalities that could occur with an at-grade rail system in Honolulu.

This is the "Expo Line," which is essentially a recreation of the "Santa Monica Air Line" that was once an important mostly-freight electrified railroad owned by Pacific Electric. While the Santa Monica Air Line route has remained intact since passenger service ended in 1953, the neighborhoods around it have changed so much that much of the local opposition probably is justified.
By the way, since the Air Line passenger service was only once a day each way, the line was actually a single-track freight railroad that ran most trains at night. Operation on the busy double-track Expo Line will be far heavier than in Pacific Electric days.

Note that much of the Expo Line will be elevated anyway, to avoid interference with busy streets. It looks like most of the track between La Brea and Palms will be elevated, while most of the segment between Palms and Westwood will be in the historic cut through the Cheviot Hills neighborhood.