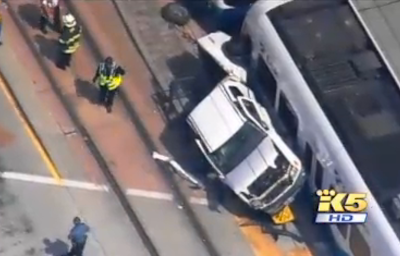 Tuesday's at-grade accident was the line's ninth in 13 months.
Here’s another reminder about one of the reasons Honolulu’s future rail system will be elevated and fully separated from surface traffic. Seattle’s KING-TV aired this report today:

Anchor: A nasty accident shuts down part of the light rail along Martin Luther King Junior Way in Seattle when a pickup truck slammed into a train..... The accident again raises questions about traffic confusion where the trains run.

Reporter: There are the people on the train…..

Passenger: It was really scary.

Passenger: We just felt the rumble and we look up and we see this truck just coming.

Passenger: There was a car coming toward me sliding along the window, and I just jumped across....

Reporter: There are the witnesses on the ground.

Witness: The windows were breaking. It was pretty scary.

Witness: And then there was a screech like the screeching of a chalk board. That's what you kinda heard for about 30 seconds.

Reporter: And then there’s the driver of this now-mangled pickup….

Driver: Yeah, there was somebody definitely on my side, the Lord or somebody. It was like the crushing of an aluminum can. You know, (crushing sound). It just kept on going and going and going. I'm going, this cab's getting a little smaller.
Reporter: What happened? Through this part of South Seattle, the train runs between the north- and south-bound lanes of Martin Luther King Way. (The driver) says this is unfamiliar territory. He was driving north when he became confused at the intersection with the tracks. 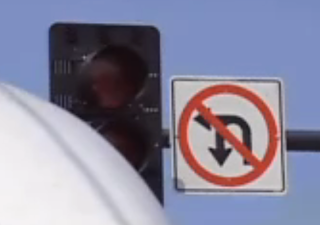 Reporter: Even before Sound Transit opened this light rail line, they had a public education campaign to try and prevent this from happening.

Spokesperson: The main thing we do is put up the right kind of signs and put up as much warning as possible to follow the traffic rules and don't make a left-hand turn where there's no left-hand turn, especially if there's a train right next to you.
Reporter: Sound Transit and police say this was preventable, with nothing more than a scratch despite major damage, another teaching moment for everyone.
Anchor: Since this line opened about 13 months ago, there have been at least nine collisions between trains and vehicles. Sound Transit had expected three times as many. Police say the driver could be cited.
Posted by Doug Carlson at 8/03/2010 06:15:00 PM

Check this video of a streetcar in Sapporo, Japan. Even though it is a hyper-modern design, its wheels seem to squeal at every curve. Fortunately, the sharpest Honolulu rail transit system curves will be at least four times less sharp.