We’ll call attention to it when rail opponents modify, appear wobbly or back away from their earlier anti-rail statements, and we do so today with apologies to Civil Beat, the online subscription news service, for quoting from its “subscriber only” rail discussion pages.

If you’re at all serious about public affairs in Hawaii, you should sign up for Civil Beat – an innovative, groundbreaking news source with unmatched daily-journalism writing and coverage in this town. (Hope that helps.)

Anti-railer Cliff Slater, who’s more responsible than anyone else in Honolulu for thwarting the city’s plans to build a rail project 20 years ago, answered a series of Civil Beat questions about rail recently. So did City officials. (We've highlighted Mr. Slater's comments on several occasions, but to get a grasp of where he's coming from, we recommend starting here.)

Here’s an except from the last paragraph of Mr. Slater’s submission:

“Traffic in Honolulu can be reduced significantly by constructing a few key low-height underpasses for highly congested intersections. These underpasses have a limited height, usually at least eight feet high that allows for vanpools, automobiles, light to medium sized trucks, and vans to fit, but not taller vehicles….” 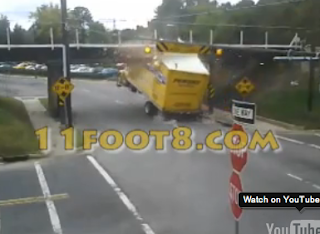 After we posted this photo and commented on the obvious danger low-height underpasses would pose for drivers of vehicles that boost their heads up to 8 feet, Mr. Slater wrote the following at Civil Beat’s rail discussion page:
“I claim no credit for low—clearance underpasses. That goes to Dr. (Panos) Prevedouros whose paper on the subject was published in 2004 and for which in 2005 he received the Institute of Transportation Engineers’ Van Wagoner Award.”
Mr. Slater claims no credit for low-height underpasses, nor should he if Dr. Prevedouros first proposed them, but he does endorse the concept and strongly recommended their adoption in Honolulu.

We'll stick with our original assessment that by proposing such an obviously dangerous roadway for Honolulu, Mr. Slater creates doubt about the totality of both his and Dr. Prevedouros's anti-rail arguments and proposals. Common sense should be top of mind when assessing their recommendations to build high-cost toll roads and low-clearance underpasses.
Posted by Doug Carlson at 10/23/2010 09:04:00 AM