Transit Can Only Get Better Once Rail Is in Place

Honolulu residents enjoy access to one of the best bus systems in the country; TheBus twice won the “America’s Best Bus System Award” in the past two decades. Just think of the possibilities once Honolulu rail is built.
Americans across the continent are reaffirming their belief in public transit, and nearly nine in 10 (87 percent) who have access to public transportation where they work or live say they use it, according to a new survey. 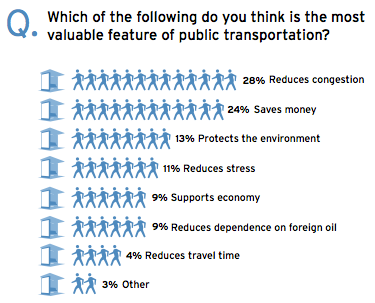 With traffic growth arguably the biggest transportation issue, about one-quarter of the survey’s respondents believe public transportation’s most valuable feature is that it reduces traffic congestion. Another quarter choose money savings as transit’s best feature. Both features presumably would rank high on land-scarce and high-cost Oahu.

Reducing dependence on foreign oil was the feature identified by about 1 in 10 Americans in the survey. Oahu residents might rate that feature even higher due to the state’s 90-percent dependence on imported oil to make our society work.

Anti-railers continue to promote highways and criticize public transit in their ongoing campaign to thwart decades of planning for Honolulu’s grade-separated rail system, which will give commuters a completely congestion-free ride.

Common sense suggests that building more highways on Oahu is not a viable way to enable future generations’ cross-town travel. Sure, the private car will continue to be a valuable family tool, but public transit is the way of the future to make the daily commute and other trips in the urban corridor.
* For more on GOO, read two and one-half years of Hawaii Energy Options posts.
Posted by Doug Carlson at 10/25/2010 08:12:00 AM

can you use more facts? i don't want to read surveys when you guys are trying to report on how rail will reduce oil. facts, numbers, please!! I was almost starting to lighten up to rail when i read this head-line, but all i see are words and opinions. there is one statistic, which i already knew, and has nothing to do with how the rail will reduce oil consumption (as drastically as you report)

please, more facts. i just realized that this is a blog, and you are only posting your thoughts/feelings. okay, im done with this blog.

I'm going to do more than give you facts. I'm going to give you the privilege of discovering them yourself by steering you toward the facts.

Go to HonoluluTransit.org and read the FEIS. It's all there; search for Energy and Pollution as key words to help you with your discovery.

Speaking of discovery, you "just realized that this is a blog"? It looks like a blog; it has "blogspot" in its URL; it in every way resembles what blogs look like.

Your discovery of the facts may take longer than I thought after all.

let me rephrase the "i just realized", i meant "i just remembered". wow you are very specific with your words, i mis-phrase something and you are very quick to include your meaningless judgmental opinion. I forgot to ask you, who are you? what do YOU do Mr. Doug Carlson?

I had the privilege of speaking to someone who works for the department of transportation, and judging by his age and the amount of information he knew, I am more likely to trust his opinion than an anonymous person. After speaking with this man for a while, I asked him point blank "as an employee of the HDOT, and a spear-head for the consent decree, do you support the rail?". He smiled and put his head down for a while and replied "I can only speak of my personal opinion, I do not support the rail". He had his reasons which I agreed with and will not mention because you, Mr. Doug Carlson, are a closed minded individual who would shut down any points this man made and not listen to them. So there you have it, not only does a professor of transportation engineering not support the rail, but also an employee of the HDOT (which is the Honolulu Department of Transportation if you did not know).

There was one thing he mentioned that I would like to share with you. He observed that the cost of the rail they quoted will definitely not be the actual cost. Actually, he said it is probably double of that (which would be $11 Billion, to make your life easier). He also mentioned that there are other less evasive methods to cure Honolulu's traffic problems such as improving the Bus system as they did in Mexico.

Of course, I do not expect this to sway any of your concrete ideals about the rail, but i thought it would be a nice little story to share with you.

And for your suggestions, no I will not research facts at the Honolulutransit.org website. As my probability and statistics professor says, anyone can BS with any data as long as you play around with the level of significance, and the authors of this site probably altered a lot of data to BS to the people of Hawaii, like you for example. I will check out the EIS, however, as well as other rail projects throughout the nation and the world for un-biased data.

One more thing, I apologize if I mis-spelled or mis-phrased something in this spiel of mine, it is just a blog you know.

Must have touched a nerve with Melia Iwamoto; she posted three more comments much like this one.

Yes, I am very specific with words. That's why I wrote "Me and Him Are Killing English!" in response to the younger generation's ubiquitous grammar mangling.

But let's get to the substance of your comment(s). You talked with a State Department of Transportation employee who told you: "I can only speak of my personal opinion, I do not support the rail" Well now. That pretty much settles it, doesn't it?

No, it doesn't. What DOES pretty much settle it is your refusal to research HonoluluTransit.org to answer your questions. Why? Because of something your probability and statistics professor told you. Here's my probability prediction: You won't educate yourself about rail to avoid finding information that might contradict your own "concrete ideals about the rail." As for BSing the people, that's not likely what the City could afford to do, Melia, inasmuch the federal government is scrutinizing every aspect of the FEIS.

As to your last paragraph, one either takes pride and responsibility for the way one expresses oneself or one doesn't -- blog or not. Check that out with an English professor on campus if there are any.