New Mayor: ‘We Want Rail and We Want It Now!’

There's new man in Honolulu Hale’s corner office, but if there were any doubts about the new administration’s intentions for the Honolulu rail project, Mayor Peter Carlisle dispensed with them in his first news conference: 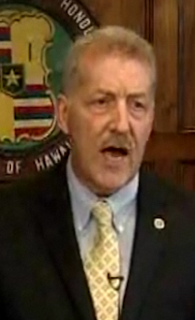 “We are united as one in the government of the city that we want rail and we want it now.”
Carlisle said he will travel this week to Washington, D.C. with Council member Ikaika Anderson and Toru Hamayasu, the city’s chief transportation planner, to meet with Federal Transit Administrator Peter Rogoff.
“It is our intention to tell them that the city’s legislative, executive and operational branches are fully committed, dedicated and enthusiastic in our support and mutual cooperation for rail,” Carlisle said.

Unstated but presumably implied is the administration’s support for the elevated system for which a completed Final Environmental Impact Statement has been submitted to the State for final sign-off.

The new mayor also urged passage in the November 2 general election of the proposed City Charter amendment to create a semi-autonomous transit authority that would oversee all aspects of the rail project as its only responsibility:

“Most importantly, (the authority) takes the politics out of it. This is going to be an independent authority that can exercise its own judgment based on its expertise and ability.”
Posted by Doug Carlson at 10/12/2010 07:32:00 AM