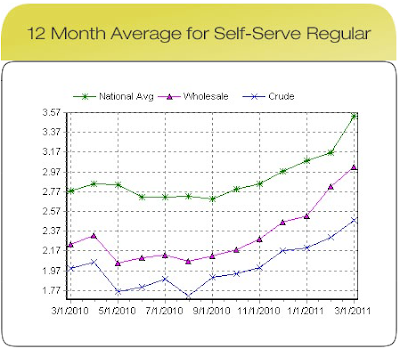 We’re down to the Final Four in college basketball, but in the world of gasoline prices and their influence on the cost of driving one’s car and increasing transit ridership, only three states have reached “elite” status.

These states are not the Final Three. More will join the $4/gallon club soon enough if the experts are right, even though the state in the number 4 position, Washington, currently trails far behind the top three at $3.777.

The above chart shows the 12-month trend in oil costs and the national average price of regular gas. Starting last August, there’s nearly a straight-line upward trend in the cost of oil.

With the summer driving season ahead and no let-up in the Middle East/North Africa drama, some analysts anticipate much higher oil prices to continue through this year. Barclays Capital just revised its forecast to an average of $112 per barrel, compared to its previous $91.

By 2020, Honolulu rail will be in operation. If the per-barrel cost of oil hits the projections, regular gas likely will cost more than $5.50/gallon using some rough calculations based on historic numbers when oil reached $147/barrel in 2008 (see chart).

More rough calculations: A commuter with a 40-mile round-trip by car each day from West Oahu using a car that gets 20 miles per gallon in stop-and-go traffic will burn two gallons a day driving to and from work. That’s $11 a day, $55 a week and over $235 per month (4.3 weeks per month) at Barclays’ projected oil costs.

What the cost of a transit pass will be in 2020 is unknown; the City council will make those decisions. Adults buy one for $60 today, and even if the cost increased by 50 percent (that’s an uninformed “for-example”), the cost of taking rail/bus transit would be far far less than the cost of gasoline alone.

Add the car-related expense of parking, maintenance and insurance and the difference between commuting by car and transit will be huge.

Car commuters become transit commuters for two reasons – cost and convenience. The anti-railers’ prediction that “nobody will ride” is inconceivable based on cost alone if the price of oil reaches the levels predicted by expert analysts.

When the convenience of no-congestion commuting is added to the decision, rail’s success in providing an alternative to driving is assured.
Posted by Doug Carlson at 3/29/2011 08:33:00 AM