Cost + Convenience = a Switch to Transit

That’s why people switch from driving their own cars and give up the freedom of movement their cars represent. We Americans love our personal freedom of movement, but we switch when the cost and convenience of taking transit outweigh driving ourselves.

Oahu residents won’t really appreciate Honolulu rail’s convenience until the system is built and they’re able to cut their travel times appreciably, but we’re already quite aware of the costs of driving. 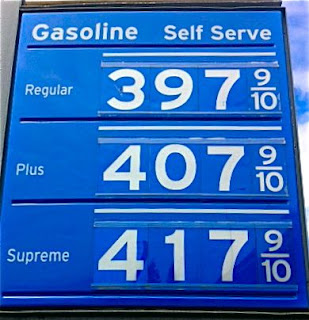 Hawaii is the first state in the nation to pass the $4/gallon mark for regular gas. Northern California may be higher as a region, but California as a whole lags behind Hawaii’s average today of $4.016. The California average for self-serve regular is a paltry $3.962. The sign at left shows prices posted today at a neighborhood station on Oahu. Prices on this link may have changed by the time you click on it; the trend in the short term undoubtedly is up!
Will Hawaii reach it’s all-time high if $4.507? With international markets rattled by Middle East unrest and earthquakes in Japan, the outlook is gloomy.

How will Oahu drivers react? Many will start taking TheBus as long as gas prices are above the $4 mark, but if prices retreat as they did in 2009, many will go back to driving. That’s what we do.

Fast-forward to 2019 and beyond, when Honolulu rail will be a fast, frequent, reliable, safe and highly cost-competitive way to travel through the urban core. There’s every reason to believe that high gas prices a decade from now combined with the exceptional convenience of taking the train will result in heavy ridership of our new rail system. The higher the cost of driving a car, the heavier rail use will be.
Posted by Doug Carlson at 3/15/2011 12:17:00 PM