H-1 Segment Is #2 among ‘Highways from Hell’ 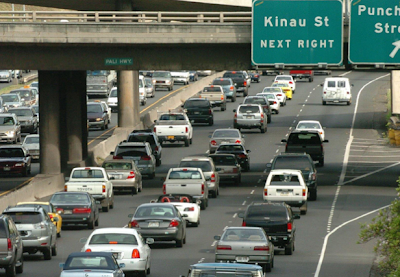 You have to wonder how this gem escaped the notice of the local media, what with all the attention they’ve been giving to the Honolulu rail project, but it did:

The H-1 freeway’s east-bound segment between the Nimitz Highway off-ramp and the Vineyard Boulevard/Ward Avenue on-ramp qualifies as the second worst traffic bottleneck in the nation.

That’s the conclusion of traffic-tracking firm iNRIX as reported a couple weeks ago by The Daily Beast. The computer analysis considered factors such as the Travel Time Tax to find the worst traffic corridors and bottlenecks among the 50 worst metropolitan areas.

A 3.9-mile stretch of Honolulu’s Lunalilo Freeway ranks number two in the analysis, right behind the Riverside Freeway in Los Angeles and just ahead of a highway segment in San Francisco.

The ranking says the segment’s so-called Travel Time Tax is 244 percent, meaning “it will take the average driver 244 percent more time to travel this stretch during rush hour than during uninterrupted travel periods.”

That’s probably not a surprise to drivers who have to travel that stretch of the H-1, but other H-1 segments have attracted notoriety of their own over the years.

Long story short, Oahu traffic is bad and getting worse, which is one of the excellent reasons to create a traffic-free travel alternative by building Honolulu rail.
Posted by Doug Carlson at 3/25/2011 01:49:00 PM