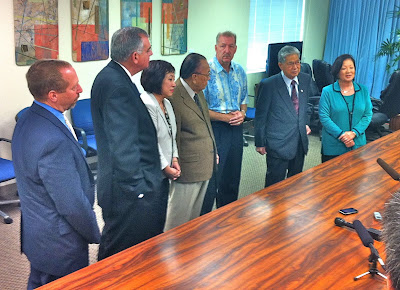 A Circuit Court judge today dismissed a lawsuit that sought to halt construction on Honolulu rail’s first phase at the west end of the route until an archeological survey could be completed at the east end.

The lawsuit contended state law required surveys to be completed before any construction could begin, but the ruling noted that the law does not prohibit phasing construction projects.

"This project is too important at this point for the jobs that will be provided for Hawaiians, for the model transit program that this will create on the island, and I have no doubt that if we continue to communicate and work with the folks here this project will move forward and the people will be the beneficiaries of it," LaHood said.

LaHood provided additional comments at a reception in his and Rogoff’s honor last night.


“Senator Inouye is the absolute lynchpin. He has been trying to get them here, and he got them here. It’s exciting, it’s energizing. It shows the confidence that the federal government has in this project. This (is) a big shot in the arm. Rail is going to happen, and these guys are going to make sure it happens.”
Civil Beat has posted a video of the post-meeting news conference. Be sure to turn up your sound. Better yet, use headphones.
Posted by Doug Carlson at 3/23/2011 01:14:00 PM

As a tourist with relatives in Waikiki, I would embrace taking rail from the airport to the hotels in Waikiki. When is it planned on expanding there?

First things first, which means building the 20-mile Phase One of the project, from East Kapolei to Ala Moana Center. The route will include a stop at Honolulu International Airport, so you could catch the train (around 2019) to Ala Moana and connect with surface transportation into Waikiki.